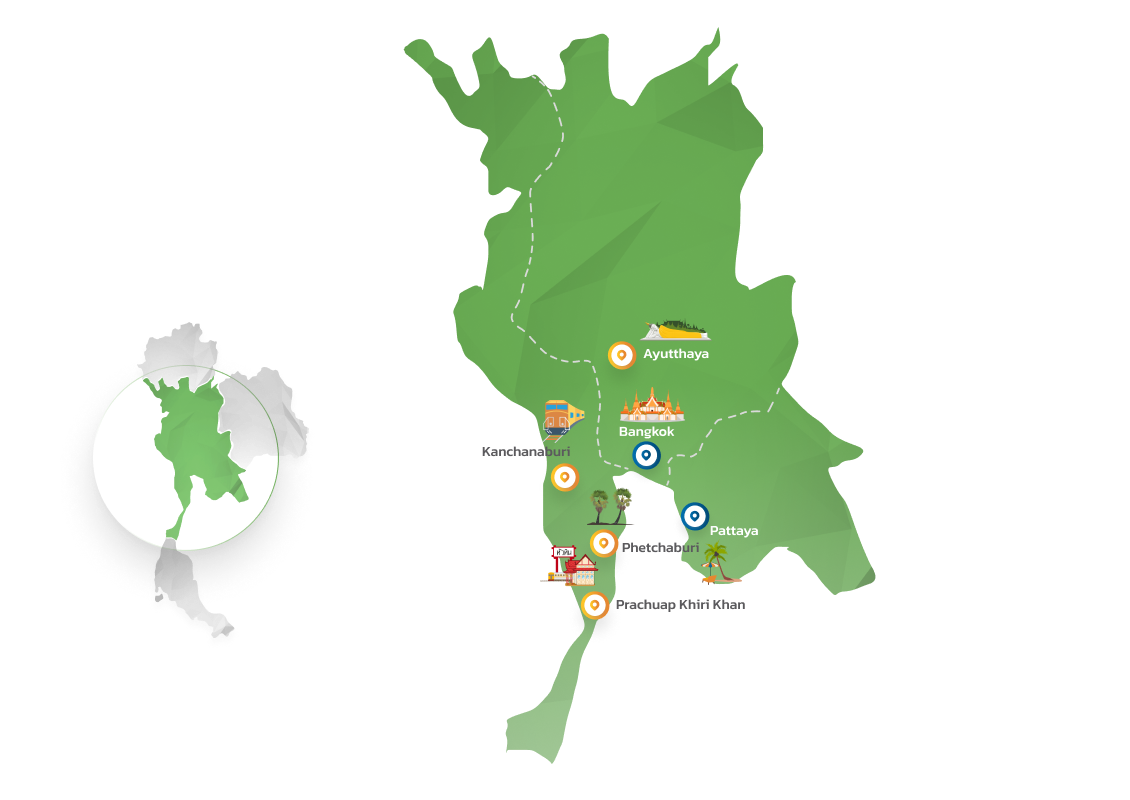 Central Thailand is the Chao Phraya River basin area where the capital city of Thailand, Bangkok, is situated, including other important cultural, economic, tourism, and agricultural provinces. Six airports are available to support the group of travellers or private charter flights. In Bangkok and Central Thailand, there are 135 convention centres with TMVS that can stage conference, modern exhibition or special events. There are also many interesting tourist attractions and important historical sites, such as the Grand Palace or those that are registered as the world heritage by UNESCO for example Ayutthaya Historical Park. Moreover, a variety of accommodations are available, from the luxurious hotel to homestay, as well as the places that everyone can learn about the local lifestyle which is available for a group visit such as Poomjai Garden, a restaurant and the garden which is a pride of Bang Khun Thian people where the Thai cooking with local raw materials workshops is offered.

Eastern Thailand is a coastal region with major rivers flowing to the Gulf of Thailand. With the fertility of the area and the vast ocean, many occupations are found for example orchards gardening, fisheries and food processing. It is the source of valuable gemstones and the major exporter of the world. Moreover, this is the area under the Eastern Economic Corridor or EEC, which is the extended spatial development from the Eastern Seaboard Development Project. Two international exhibition and convention centres are located here, which are Pattaya Exhibition and Convention Hall (PEACH) which is located at The Royal Cliff Hotels Group, that supports up to 10,000 participants, and Nongnooch Pattaya International Convention and Exhibition Center (NICE) which is the large exhibition and convention centre located at Nongnooch Garden occupying 15,000 m2. Furthermore, there are many natural tourist attractions such as Khao Laem Ya - Mu Ko Samet National Park in Rayong, or the community based tourism, such as Takhiantia Community, the agricultural community which is the owner of the last coconut garden in Eastern Thailand or the Chinese Community Tourism - Ban Chak Ngaeo Village that was originally established by the Chinese people in Chonburi.

Western Thailand is very famous for its diverse natural tourist sites, both the jungle and the beach which are very popular among Thai and foreign tourists for example Erawan National Park, and the historical sites such as the River Kwai Bridge in Kanchanaburi. In addition, the southern part of this region: Cha-Am in Petchaburi and Hua Hin in Prachuab Kirikhan, are the well-known beach towns where the beauty of the sea can be enjoyed and the towns are also equipped with modern infrastructures in a short driving distance from Bangkok. Moreover, the accommodations in this area are assorted, from the luxurious hotels, resorts, and rafts which are very unique. There are 31 convention centres and venues with TMVS that support the seminars and conferences, including Sheraton Hua Hin Resort & Spa, which is certified with AMVS (ASEAN MICE Venue Standard).