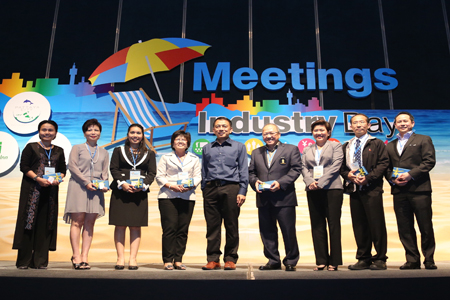 The holding of Meetings Industry Day 2013 responds to the Government policy in initiating meetings in MICE City. Aspiring to motivate economy and improve local manpower, the event will generate revenue and disseminate knowledge for sustainable development of regional MICE.

Pattaya / 23 August 2013 – Thailand Convention & Exhibition Bureau (Public Organisation) or TCEB held the annual entrepreneurs' meeting or "Meetings Industry Day 2013". Having landed invitations to association managements, representatives from public and private sectors, as well as entrepreneurs relevant to meetings industry from central region and Pattaya City, a total of 200 attendees will be joining in this prestigious symposium in Pattaya, Chonburi, during 22-23 August 2013, at PEACH Conference Center. TCEB will reveal strategic plan on the complete advancement of meetings industry and map out the direction of Thai meetings industry. As well, leading figures from meetings industry will be present at the event to share their insights and knowledge under the concept "Remix the MIC The Winning Formula".

Mr. Nopparat Maythaveekulchai, president of Thailand Convention & Exhibition Bureau (Public Organization) or TCEB, disclosed that, “Objectives of the Meetings Industry Day 2013 embrace the motivation of network creation and connect business relationship. The seminar was designed to educate attendees about meetings business and benefits that every sector will be earning from MICE industry, which, in other words, is an essential mechanism in empowering the nation’s economy and society. Particularly the international convention, corporate meeting and incentive tourism, or the so-called MIC – Meeting Incentive and Convention, all of which is the business that contributes massive proportion of revenue into Thai economy in a successive manner,”

“Under the WIN PROMOTE DEVELOP strategy, TCEB will support and strengthen MICE business side by side with the development of MICE City in order to serve the country’s leadership in holding regional and national MICE events. Ranging from escalating entrepreneurs’ potential, improvement of competency to increaing value-added activities within target provinces, all efforts is heading towards raising the amount of MICE travellers and volume of revenue. The holding of Meetings Industry Day 2013 implements the bureau’s strategy and responds to the Government policy which requires actual holding of meeting in MICE City to help motivate the economy and improve local human resources. The meeting is also considered an activity that persuades holistic improvement of meetings industry and entrepreneurs’ potential to fulfill the achievement of meetings industry in 2013.” added Mr. Nopparat. 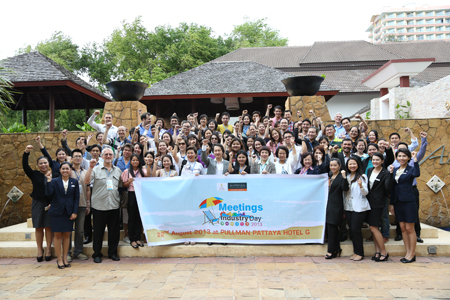 Mr. Nopparat further added that, “To hold this event in Pattaya is a golden opportunity for MICE entrepreneurs to witness the growth of Pattaya as a MICE City that’s been offered chances to welcome MICE travellers visiting Thailand in the remaining months of 2013. At this point, Pattaya is getting ready for the holding of remarkable events, such as 21st International Union on Health Promotion and Education World Conference on Health Promotion and Education - IUHPE 2013, 10th World International Farm Youth Exchange Conference 2013 (10th World IFYE Conference 2013) and Prudential Singapore Fast Track 2013.

Pattaya plays the role of Thailand’s 2nd MICE City. Currently, Pattaya is home to 396 hotels, which include hotels operated by Thais and international hotel chains, with the total of 28,459 rooms. Meetings rooms residing across hotels accounted for 102 rooms, allowing total flexibility to organise international MICE events of all scales regardless of small or large size. Further, there are 3 large convention and exhibition centres in Pattaya for which could offer the space of 13,212 square metres in total. These state-of-the-art facilities include the convention centre at Ambassador City Jomtien Hotel, Eastern National Sports Training Center and PEACH Conference Center. Moreover, Pattaya is willing to support the development as MICE City with the invention of packages for the convenience of MICE travellers as follows: 1. More than 100 attendees travelling together will be led from the airport to Pattaya by exclusive guiding vehicles and are being invited to join specially arranged environmental conservation activities; 2. More than 300 attendees travelling together will be warmly welcomed by the Mayor of Pattaya accompanying with a party and welcome drinks and 3. More than 500 attendees travelling together will be entertained with special shows from Pattaya City. Those wishing to extend their stay will be offered rooms with discounted rates.

At any rate, Pattaya is considered one of Thailand’s distinct MICE Cities to have been offered opportunities to welcome foreign MICE travellers joining meetings events from time to time. In 2013 (January-August 2013), Pattaya has held a total of 54 events which pooled as much as 23,494 attendees into the city. Notable events included Metlife Korea, Infinitus 2013 Group China, Abbott National Conference Group, Merck Chemical Division, etc.