PHUKET JOINS HAND WITH TCEB, PROMOTING PHUKET AS “MICE CITY OF ANDAMAN” Phuket to become a MICE City in Thailand 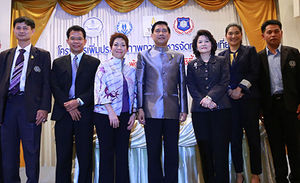 Phuket/ 26 April 2013 - Phuket and the Thailand Convention & Exhibition Bureau (Public Organization) or TCEB today held the first seminar on “Phuket – Towards Sustainable MICE City” where more than 100 representatives from public and private sectors and media in Phuket and neighbouring provinces joined together to learn more about how to enhance Phuket’s capability to become the hub for meeting, incentive, convention and exhibition (MICE) industry in the southwestern coast provinces. Interesting successful cases from other countries were also shared.

Mr. Maitree Intusut, Phuket Governor, said, “Phuket province views that creating and adding more values for tourism industry is crucial to achieve sustainable growth for Phuket and the neighbouring provinces. We have formulated the 4-year development plan for the island to become the centre and the dream destination of visitors worldwide. Under the “Charming Andaman” direction, Phuket has developed the “4Ms” strategy. The first M is “MICE” under which tourism products and services should be further developed to support MICE industry that has unique characteristics. The second M is “Marine” where comprehensive marine industry, both for trade and tourism, will be in focus. The third M emphasises on “Manpower” as it is necessary for us to cultivate human resource by increase people’s capability and skills to support the growing tourism industry. The last M stands for “Medical Hub” which has high growth potential.

“With the 4Ms strategy, Phuket will be further developed based on its strength as a favorite tourist destination and a business centre of the South. So far, we have introduced several development projects, such as marina and travel boat service promotion, cultural tourism development with focus on museums and local architecture and MICE business. We aim to leverage on Phuket’s positioning as a business and trading hub enabling to enhance economic and social development in the provinces on the Andaman Sea coast. This seminar is our concrete action in announcing our commitment to take Phuket to another level as Thailand’s new world-class MICE destination,” said Mr. Intusut.

Mrs. Supawan Teerarat, TCEB’s Exhibition Director, said, “Phuket is one of the four active MICE cities in Thailand. Phuket and TCEB signed an MoU in 2009 to develop the province into a MICE City.

“Phuket possesses potential strengths to become a successful MICE City. As a charming island and a favorite tourist destination in the Andaman Sea, Phuket has very good transport infrastructure, hotels and accommodations, meeting and conference venues as well as activities that best address specific needs of MICE travelers. In 2012, Phuket’s MICE industry value is as high as 4,820 million baht, which is second to Bangkok. Out of this, 4,725 million baht is contributed by international MICE activities and the remaining 95.66 million baht is from domestic MICE activities. In terms of number of events, Phuket hosted 788 events last year, which attracted 79,862 visitors, including 59,066 foreign MICE travelers and 20,796 Thai MICE travelers.

TCEB plans to promote Phuket as a MICE destination with good connection worldwide through a campaign to raise awareness among target group. Focus will be on six key selling points that address different needs of MICE customers as follows:

“Phuket will be the core of the Andaman Cluster, comprising Phuket, Phang Nga, Krabi, Trang and Ranong. It will be the spearhead in lifting the MICE industry of the Andaman Cluster to the world level. The government, operators, media and everyone else have to participate in setting goals and concrete marketing plan to make Phuket the MICE destination. The seminar today will not only provide information and understanding on MICE and Phuket’s strategic direction, but also allow us to hear from concerned parties their views and recommendations. This is a good jump start for us all to move forward together. TCEB is ready to support Phuket in achieving its goal,” said Ms. Teerarat.

Phuket’s Potential as a MICE City

Phuket is one of the southern provinces with the highest economic potential. It has a large population of 353,847 and GDP per capital of 324,385 baht, which is the highest in the southern region and ranks 10th in Thailand.

There are 636 hotels, including three- to five-star hotels, on the island with a total of 37,543 rooms plus another 20,000 resort and bungalows.