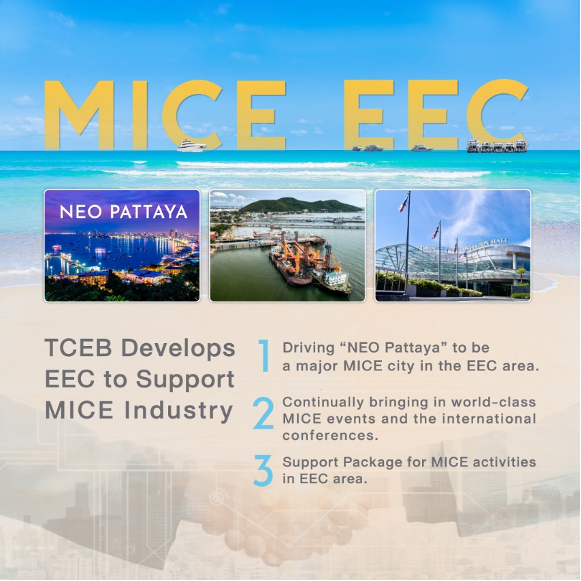 Under the government’s policy, the development plan of “Eastern Economic Corridor” or “EEC” is a mega scheme in Thailand aiming at enhancing and transforming the country into Thailand 4.0 era by developing the 3 Eastern Seaboard: Chonburi, Rayong, and Chachoengsao. The EEC development plan will also support their physical and social fundamental infrastructure development, such as public utility, comprehensive logistics system covering travel and transportation by land, water, and air, 5G networks promoting Thailand as ASEAN Digital Hub, also upgrading the EEC area to support a wide range of MICE events in order to uplift the country’s competitive abilities. It is also in the intention to enhance and support the growth and investment of 12 focused industries: Next-Generation Automotive, Intelligent Electronics, Advanced Agriculture and Biotechnology, Food for the Future, High-Value and Medical Tourism, Robotics, Aviation and Logistics, Medical and Comprehensive Healthcare, Biofuel and Biochemical, Digital, National Defense, and Education and Human Resource Development. So, the government foresees that the 12 focused industries have potential to create enormous economic value from both domestic and foreign business investments in EEC area.

TCEB joins in driving the EEC area to be high-value and special economic area and uplifting its competitive abilities by supporting and maintaining Pattaya city, one of 10 MICE cities in Thailand, as a MICE city. Under the idea of “NEO Pattaya”, Pattaya becomes a major MICE city in EEC area to support all types of MICE events.

NEO Pattaya is the idea that aims to bolster Pattaya to entirely become Smart City, MICE City, Sport City, and Medical Hub by driving 4 strategies: economy, society, environment, and culture. Accordingly, Pattaya can become the world-class metropolitan of MICE that is always ready to accommodate travellers and MICE events organizations worldwide. Undoubtedly, this also will help encourage the sustainable investment in EEC area in the future.

In addition, TCEB join hands with both public and private agencies to continually bring world-class MICE event and the international conferences to Thailand to be hosted in the EEC area like Thailand International Air Show. We also encourage companies, organizations, and agencies who want to organize international trade shows in the EEC area with support package “New Show in EEC” under concept of "Co-Creating Exhibition Future" which supports organizing new shows. This package also supports organizers, exhibitors, and buyers in both forms of physical and hybrid events with the 2HY standard that comes from a combination of hygiene and hybrid.

TCEB’s support will help promote more MICE events held in Pattaya and other cities in the EEC area which leads to creating economic value, increasing employments, and income distribution to local communities. It is also a publicity that the EEC area has enormous potentials in being ready to accommodate MICE travellers and all types of events with such comprehensive facilities as public utilities, transportation, logistics, etc. This will entirely support the investments and fully strengthen Thailand’s competitive abilities with other countries.