Thailand MICE on the RISE! TCEB rebranding and major new developments to drive strong growth in 2013 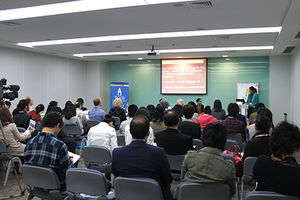 Shanghai, 18 April, 2013 – Thailand’s Convention and Exhibition Bureau has come to Shanghai to participate in IT&CM and boost Thailand’s share in MICE markets in China and across the Asian region.

Thailand’s MICE industry is reaching out to China, pointing to the country’s continuing buoyant economic growth and Thailand’s advantage as a springboard for the forthcoming single market of the ASEAN Economic Community (AEC) in 2015. 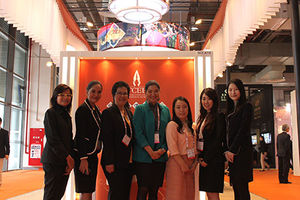 Last year’s economic crises in Europe and USA had a relatively limited impact on Asia’s MICE industry, which have shown a rapid return to growth; reflecting a new business optimism across the region, the phenomenon has been dubbed "The Asian Era". Thailand’s MICE industry has shared in this broader Asian dynamism, as indicated by the growth in numbers of MICE travellers from Asia to Thailand in 2012. Asia represents 65 percent of all overseas MICE visitors to Thailand and is considered as key to the sector’s future growth. The five top-ranked countries are India, China, Singapore, Japan and Malaysia, respectively

With China projected to overtake USA as the world’s largest economy over the next 6 years, the country’s recent strong economic performance is expected to boost numbers of MICE travelers from China to Thailand, based on Thailand’s competitiveness and unique attraction as a destination both for business and leisure. The growth in intra-regional trade expected to result from the formation of the AEC will deliver a further long-term stimulus to the region’s business events industry.

Added to this, China’s proximity to Thailand and the close cultural affinities and longstanding trading ties between the two counties, signal a bright future for the events sectors of both countries.

China is both Thailand’s largest export market and its second-largest source of imports, with trade volume reaching US$69.7 billion in 2012. In 2012 we welcomed 63,955 Chinese MICE travelers to Thailand- an increase of 31.6% over 2011 figures. This included 16,000 delegates joining the Amway China mega-event, hosted on the exotic island of Phuket.

Overall, 2012 was a buoyant year for Thailand’s MICE industry, with 895,224 MICE visitors and 7,382 MICE events, 6.84 percent up from 2011, and exceeding TCEB’s annual target. Last year, the average stay for overseas MICE visitors was 5.5 days, with an average contribution of US $536 per person per day. Thailand’s MICE industry was also responsible for 9.49 percent of all tourism earnings in 2012. Conventions contributed 33 percent, followed by corporate meetings and incentive travel, which contributed 25 and 24 percent respectively. International exhibitions and trade shows accounted for 18 percent of total MICE revenues for 2012.

TCEB is confident of continuing growth in 2013, driven by a major rebranding and strategic repositioning of the organization, and continuing strong public and private sector investment in MICE venues and related developments. TCEB forecasts further growth of approximately 10% to an estimated at 70,351 MICE visitors from China during 2013. This includes two major incentive tourism events: Nu Skin in April (Phuket, 4,000 delegates), and Perfect China in June (Pattaya, 6,000 delegates).

Commenting on the Chinese MICE market, Ms. Parichat Svetasreni, Marketing Communications Director of TCEB, disclosed. “In 2012, China was Thailand’s second largest MICE market with 63,955 MICE visitors. The Chinese government itself has also been encouraging Chinese businesses to invest in trading or and travel overseas, and last year bilateral times were upgraded by the establishment of a comprehensive strategic cooperative partnership, and the signing of seven cooperation agreements on issues ranging from trade, agriculture and railways to flood and drought prevention. The two countries plan to expanding bilateral trade to US$ 100 billion by 2015.

“Thailand aims to tap into China’s dynamic MICE market, which is one of the key future markets for Thailand’s MICE industry. We are therefore confident that TCEB’s participation at IT&CM will help showcase what we have to offer to Chinese businesses, and contribute to our efforts to build Thailand’s share of this important market.”

“We also expect to drive new business growth in the MICE sector as a result of our ongoing initiative to reconfigure and rebrand the TCEB organization itself. The strategy is based on identification of five key drivers of growth in the MICE sector: (1) Building strategic alliances spanning private and public sectors, regionally and globally; (2) Serving as a strategic business partner for MICE stakeholders from Thailand and overseas; (3) Position TCEB as a MICE industry thought leader, providing macro-level insights and initiating new business approaches; (4) Providing a knowledge platform to facilitate access to updated MICE business resources, information and market research; and (5) Becoming a solution provider- this means delivering strategic opportunities for business growth to the MICE industry.

“Together with the boost to the MICE industry given by the recent surge in investment in new convention venues, hotels, cultural attractions, and mass transit systems, we believe that this strategic repositioning will drive growth, create new economic value and increase revenues. In summary, we can be confident that Thailand’s MICE industry is most definitely on the rise. In 2013, we anticipate a boost in MICE industry earnings to reach US$ 2.93 billion.

“However, we should always remember that Thailand remains the top MICE destination not only because of its world class facilities, services and infrastructure, but also because of the uniqueness of its cultural heritage, the range of leisure activities, of course our cuisine, and perhaps most important of all, the friendliness and kindness of Thai people.” concluded Ms. Parichat.

A surge in investment in MICE-related projects resulted in the opening of dedicated new convention venues, hotels, cultural attractions, retail projects and infrastructure developments in 2012, adding even more choice to the diversity of options already available to MICE visitors in Thailand.

1. Phothalai Leisure Park, Thailand’s new MICE benchmark, is a state-of-the-art convention and event venue located right in the heart of Bangkok. Its 10 tastefully decorated function rooms offer unlimited options for up to 2,000 delegates, with both indoor and outdoor venues. The function rooms are fully equipped with the latest AV and internet technologies, and supported by an in-house creative and event service team. Phothalai has its own world-class spa, 8 restaurants and lifestyle caf?s, wine cellar dining, and Asia's first 6-star golf and leisure complex.

2. Bangkok Art and Culture Centre (BACC) is a new mid-town facility for the contemporary arts. Programmes for art, music, theatre, film, design, as well as cultural and educational events take place in a friendly and recreational atmosphere. The Centre also has restaurants, a caf?, bookshops and an art library within the facility. BACC comprises 10 floors including exhibition space and main galleries covering more than 3,500 m2. Its 222-seat auditorium is designed for musical events and film screenings. BACC also offers a multifunction room with 250 seats and a meeting room designed for conferences, community meetings, lectures and workshops.

3. Central Embassy is a stunning, high-end retail development in Bangkok centrally situated on a site previously occupied by the British Embassy. Retail space is already 70 percent sold and will open later this year. Altogether, the property is currently undergoing close to US $3 billion of development, targeting high-end and international visitors, and including approximately 5,000 new 5-star hotel rooms. Its central location and easy access by Skytrain make it the city’s most impressive retail and hospitality destination.

4. The Hilton Hotels & Resorts brand is staking a claim on Bangkok’s fashionable and buzzing Sukhumvit Road. The Hilton Sukhumvit Bangkok will have 285 guest rooms and 35 suites, and is scheduled to open in May 2013 with accommodation, restaurants and amenities that will attract both tourists and business guests alike.

5. The 80-room Huachang Heritage Hotel Bangkok is inspired by the new Thai colonial style, an elegant blend of Western-influenced architecture and contemporary Thai design, evoking the nostalgic charm of the architecture of the King Rama V period. The hotel is located on Phayathai Road, Pathumwan District, across the road from Sra Prathum Palace. A wide choice of leading shopping complexes, the BTS Skytrain, the National Stadium and many tourist attractions are located within walking distance.

6. Outside Bangkok, Le Meridien Koh Samui Resort & Spa, located on Lamai Beach just 20 minutes from Samui International Airport, is an enchanting island hideaway. Its 14 villas and 63 suites are set in stunning gardens with breathtaking views over the Gulf of Thailand. The Library—a refined meeting room—and a selection of breathtaking outdoor spaces can be transformed to suit a MICE organizer’s vision. For an unforgettable board meeting or stunning beachside cocktail function, Le M?ridien Koh Samui Resort & Spa will inspire creativity and its dedicated events team will ensure the success of any event. Winner of the World Travel Awards for Asia’s Leading New Resort 2012.

7. After 5 months of renovation, Siam Center, one of Bangkok’s most iconic malls, reopened its doors on 11 January 2013 with a brand new look to mark its 40th anniversary. The new design has been dubbed “Ideaopolis” and the mall aims to offer inspirational spaces for art and design, befitting its reputation as the vanguard of the local fashion scene. To celebrate its reopening, the mall will curate a fashion-focused exhibition showcasing the works of Andy Warhol, Comme de Garcon and Yohji Yamamoto, alongside works by top local designers.

8. Bangkok’s new The Museum of Floral Culture is the brainchild of floral artist Sakul Intakul, who converted an old colonial building into a museum for floral art and design. The massive golden teak building dates back to 1920, and showcases a fascinating and unique collection, that reflects an important Thai cultural tradition. The museum also features unique exhibits of important floral cultures from across Asia.

9. Terminal 21 is one of Bangkok’s newest shopping complexes. Its airport-based theme combines the elegance and atmosphere of some of the world’s top destinations—Rome, Paris, Tokyo, London, Istanbul, San Francisco and Hollywood—all under one roof and connected via a 36-metre escalator. Enjoy a perfect combination of fashion, food, and film, with more than 600 high-class shops for discerning urbanistas. The brand new Terminal 21 is easily reached via BTS and MRT train services– ‘The Whole World is Here’.

10. Bangkok’s Mass Rapid Transport (MRT) underground network will see four more extensions opened over the next two years, whilst The Bangkok Skytrain (BTS) is also undergoing major expansion, including routes from Wong Wien Yai to Pho Nimit and Wutthakat, ending at Bang Wa, and from National Stadium to Yotse, with further extensions planned from Bearing to Sri Nakarin Road.