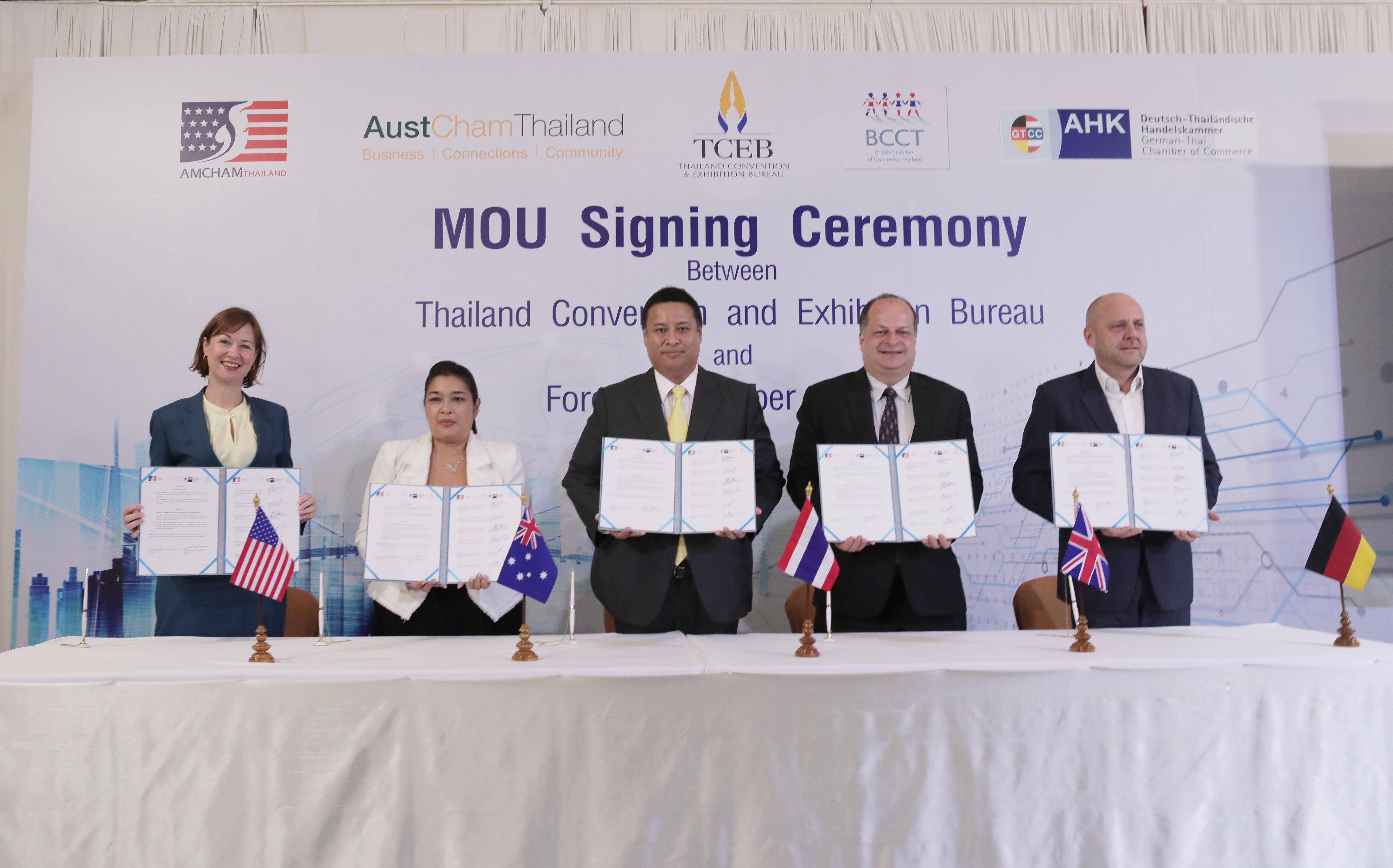 TCEB is leveraging the development of Thai MICE business in long haul markets in collaboration with foreign chambers of commerce representing Australia, UK, USA and Germany. Through the signing of MOU to form a coalition of alliances to attract events and MICE travellers from target markets, TCEB plays a crucial role in opening gateway for countries from all continents to hold events in Thailand.

Mr. Chiruit Isarangkun Na Ayuthaya, President of Thailand Convention & Exhibition Bureau (Public Organization) or TCEB, disclosed that the signing of MOU “The Development and Promotion of MICE” between TCEB and Foreign Alliance – FCA, comprising 4 chambers of commerce representing our main target countries, which are Australia, UK, USA and Germany, is considered another remarkable step of TCEB in altering our role to leverage MICE by serving as a business partner who joins hands with foreign organisations to promote the development of Thai MICE in international markets, as well as to penetrate into long haul MICE markets in Oceania, Europe and the USA, side by side with our main short haul target markets in Asia. 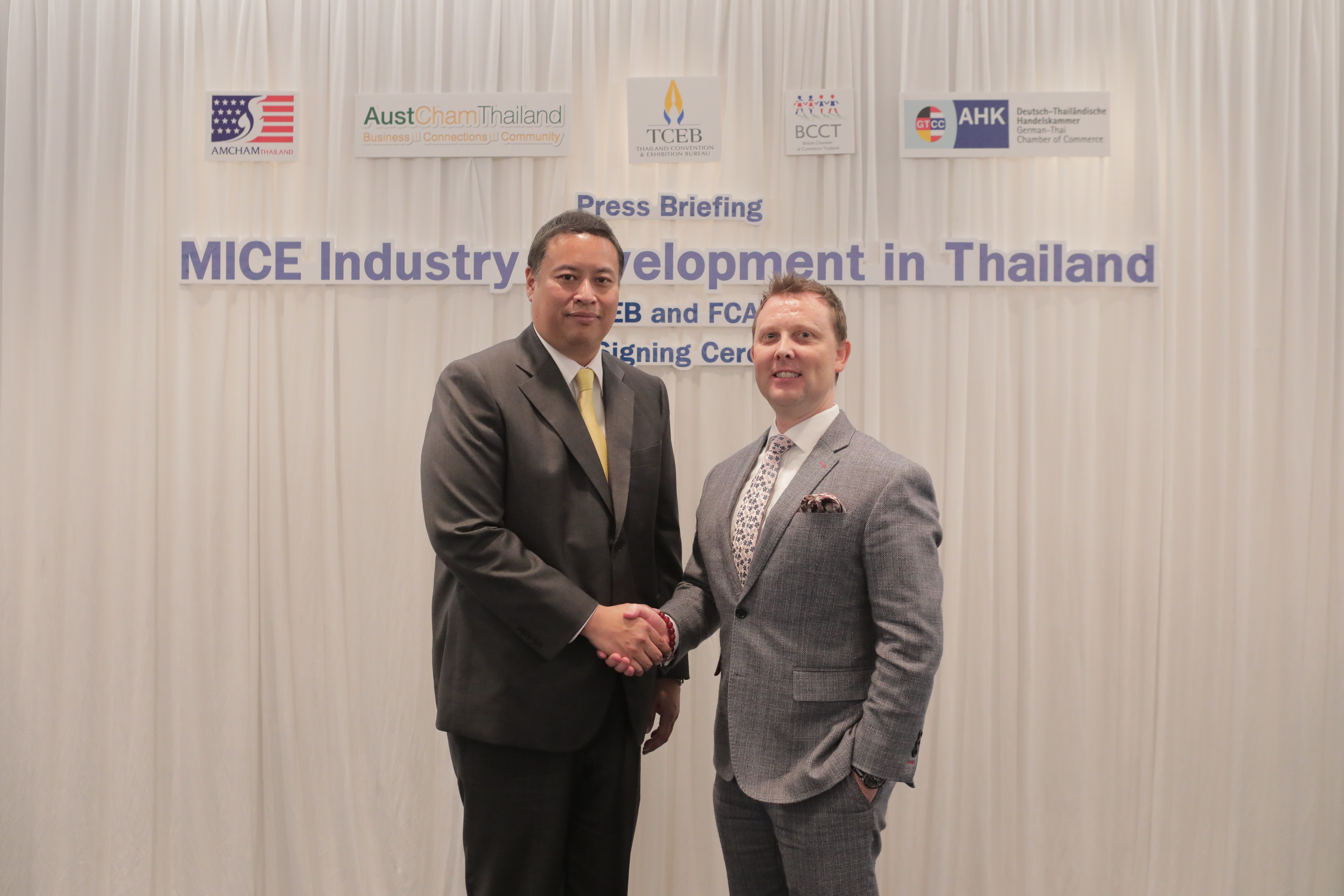 "Indeed, the collaboration is a new dimension of promoting Thai MICE in long haul markets with concentration on Oceania, Europe and the USA. This is the very first time that the Foreign Alliance – FCA, which represents Australia, UK, USA and Germany, signed an MOU with Thai government agency. Interestingly, FCA has more than 20,000 members that include businessmen, investors, entrepreneurs from business, industrial and service sectors, such as Minor Hotels Group, AccorHotels Group, Marriott Hotels Group, convention centres business, as well as oil, mining, pharmaceutical, automobile and other industries. These are considered high potential business groups for the propelling of national economy and are included among the S-curve targeted industries that Thai government has eyed to encourage in line with the 4.0 Policy. For this reason, this is a lucrative opportunity for us to collaborate to develop and raise the competitiveness of Thai MICE. The 4 chambers of commerce have recognised the importance of using MICE as the gateway to the development of commerce and investment in Thailand and ASEAN.

Mr. Chiruit further said that the initial collaboration to mutually promote MICE business will mainly focus on hospitality service, because members of the FCA have long records of investment in Thailand, which have been running alongside their nationwide service businesses. Hence, they have eyed to extend collaboration with Thai government agencies, as they believe the endeavour will open a new door to operate MICE business in Thailand and ASEAN. This, in turn, will allow them to study about the dynamic and direction of Thai MICE market. By joining with TCEB in formulating marketing development scheme, the synergy will open a new door to connecting with other alliances who relate with the promotion of Thai MICE business in targeted countries. Moreover, there will be cooperation in drawing international events into Thailand, marketing promotion and provision of support for events previously held in Thailand. Target groups and alliances will be invited to participate in regard to strengthen the potentials of MICE events held in Thailand to soar as global events. The FCA will join with us in the exchanges of marketing information related to targeted industries held by allied chambers of commerce. Meanwhile, TCEB is prompted to exchange information on Thai MICE business, including statistics and event holding, to fully bolster mutual MICE business development.

Nevertheless, the FCA expects Thai government to leverage the competitiveness of Thai MICE in order to serve global competition. For example, facilitation of customs and immigration procedures; development of infrastructure and transportation; construction of convention centres; development of MICE personnel that meets international standards, and establishment of One-Stop-Service MICE centres. All of which will open a new door to the holding of MICE events in Thailand by efficiently offering enhanced convenience for MICE entrepreneurs and organisers. Previously, the proposal on the establishment of MICE service centres has been included in TCEB’s strategic plans, which are the Ease of Doing Business project and the draft of national strategy of NESDB (Office of the National Economic and Social Development Council).

After the completion of MOU signing, TCEB is set to discuss with FCA on the preparation of Phase I work plan, which lasts two years. Both parties will encourage practical co-operation in a rapid and consistent manner. Initially, we have planned to attract events and provide support to the holding of events that relate to targeted industries according to the government’s 4.0 Policy, particularly in the provinces governed by the administration of EEC (Eastern Economic Corridor).

“TCEB expects that the collaboration will not only leverage the competitiveness of Thai MICE in long haul markets in Oceania, Europe and the USA, but will also help to attract international events into several regions in Thailand, especially those considered main markets in MICE City project, which are Bangkok, Pattaya, Phuket, Chiang Mai and Khon Kaen. Definitely, we believe the rapport will encourage transfers of technology and knowledge of each industry among one another, and thus will promote advancement in all regions and stimulate income distribution to communities nationwide.” concluded Mr. Chiruit. 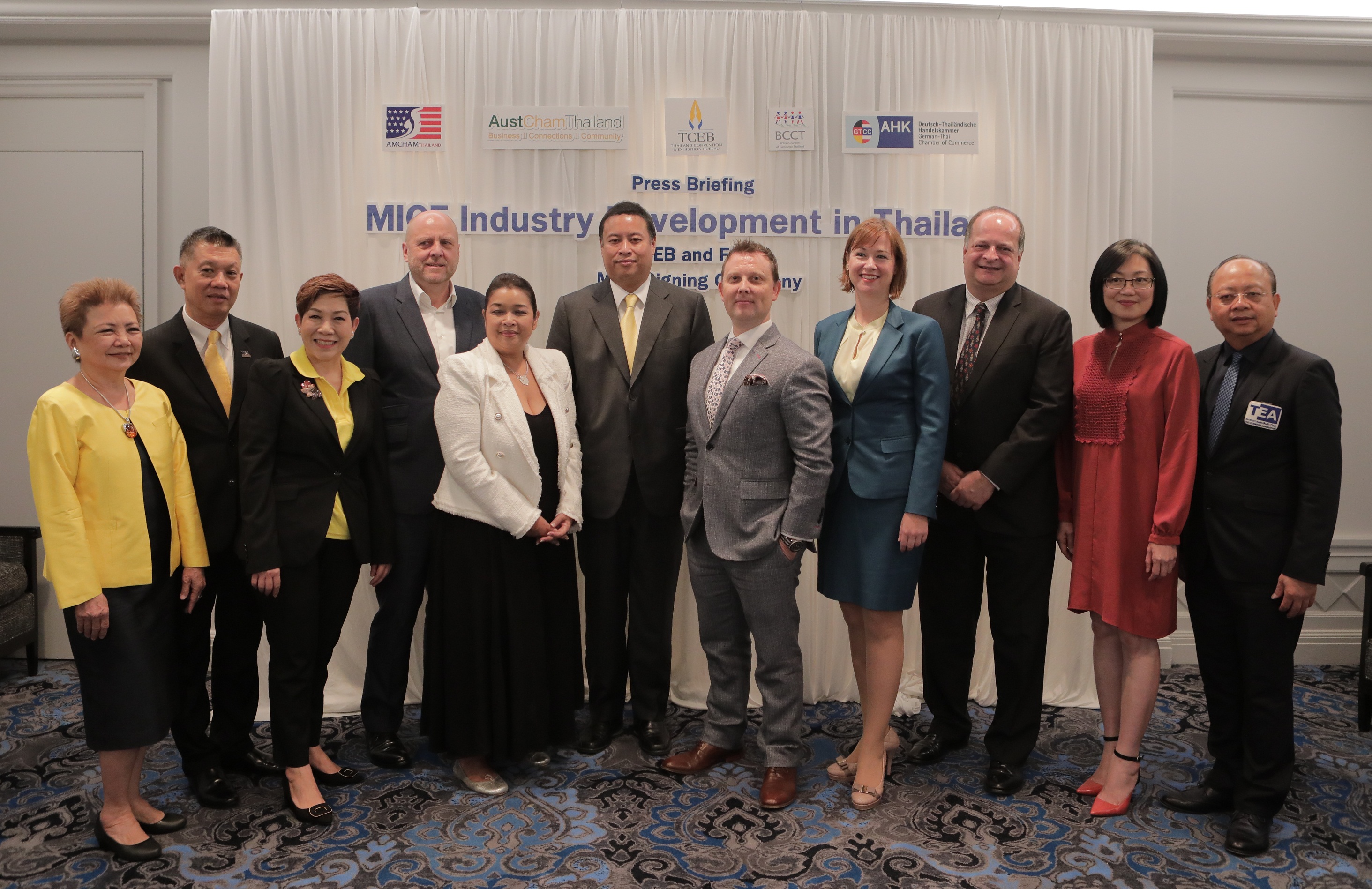 Mr. Benjamin Krieg, Vice President, Austcham, explained about the role of Foreign Chamber Alliance (FCA) in Thailand and the purpose of signing MOU with TCEB that, The Foreign Chamber Alliance (FCA) combines key Foreign Chambers of Commerce in Thailand, namely the Australian, American, British and German chambers and their members. Through this important collaboration, we provide a common voice on advocacy and as in the case of this MOU with TCEB help to develop and grow opportunities that can benefit our members and the country of Thailand.

The signing of this MOU is an important step, formalising the initial groundwork that has been undertaken together with TCEB for the MICE industry within Thailand, and setting the framework for future enhanced collaboration.

“The MICE industry is, and will only continue to grow in its importance and contribution to the overall tourism sector within Thailand, and of course the greater Thai economy. Our primary aim is to continue to increase and grow the competitiveness of Thailand as a leading destination for MICE not only within Asia, but the world, further complimenting the amazing tourism industry that we already are so fortunate to be a part of.” concluded Mr. Krieg.