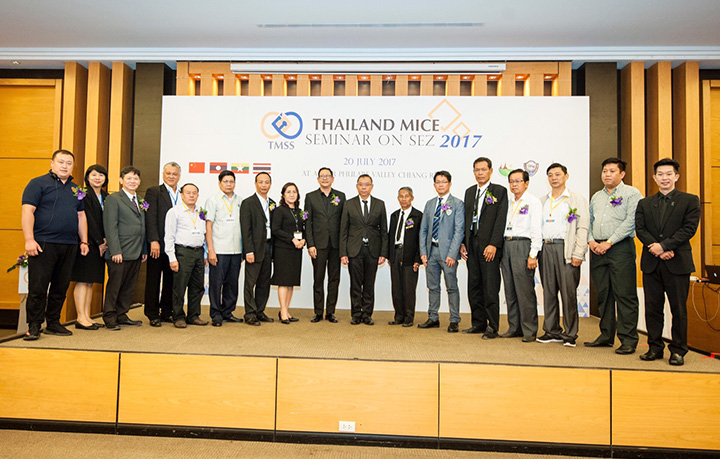 The Thailand Convention and Exhibition Bureau (Public Organization) or TCEB and Chiang Rai Province organised “Thailand MICE Seminar on SEZ 2017 – TMSS” in Chiang Rai. The seminar aimed to ally Lao People's Democratic Republic, the Republic of the Union of Myanmar and People's Republic of China (Yunnan) to use MICE bridging and networking all member countries to build up the strength before expanding to Greater Mekong Subregion countries (GMS) in the future.

The Chiang Rai’s Special Economic Zone has strong potential for the MICE industry and  tourism. Chiang Rai, with three permanent crossing points linking with the Republic of the Union of Myanmar and three more with Lao People's Democratic Republic which could connect through to Southern China, sees a booming of cross-border trade, making it such a leading province that contributes revenue to the country. Chiang Rai, which lies in the middle and in conjunction with R3B and R3A trading routes, is a strategic gateway to the North-South Economic Corridor. The province also plays a big part in being a centre for trading, investment and tourism & MICE in Economic Quadrangle that connects to Greater Mekong Subregion (GMS). The objective of the seminar is to boost knowledge and understanding about MICE industry among officials and entrepreneurs from the four countries . It also pinpoint the importance of MICE industry and its potentialities so all GMS countries would get more MICE travellers by conducting potential MICE together.

The “Thailand MICE Seminar on SEZ 2017 – TMSS” focused on three different issues: Strength Management over the Economic Quadrangle, Trade and Investment Cooperation in the Greater Mekong Sub-region (GMS) and Lancang-Mekong Cooperation (LMC), and General Tourism and MICE Industry Cooperation on GMS and LMC sub-regional economic zones. The efficient convention was staged up for officials and executives from government and private sectors to brainstorm, exchange the ideas and share the experiences on Special Economic Zones. The attendees of the conference included the administrative officials from Chiang Rai, Prae, Nan and Prayao provinces (Thailand), the delegates of Golden Triangle Special Economic Zone (Bokeo) and Boten Special Economic Zone and the government officials from Luang Namtha (Laos), Tachileik (Myanmar), Kengtung (Myanmar) and Pu'er City (China).

“The Economic Quadrangle has huge potential for the economic expansion since the economic growth has been increased steadily. TCEB envisages that MICE can be a driving force to generate income and economic expansion if the members of this sub-regional work it out together. Apparently, Asean draws a large group of MICE travellers from all over the world. On each trip, the MICE travellers spend 3.5 times more than general holidaymakers. Besides, the MICE industry is also a centerpiece for trade talks, a beginning of internal trade, among the member countries.

This seminar, for example, is the first time the local tea growers from Chiang Rai (Ban Huay Krai, Ban Huay Kaew and Ban Pang Khon), have a chance to meet their counterparts from Pu'er City in Southern China. Chiang Rai’s tea growers are noted for their black organic tea - which is cultivated from 100-year-old Assam tea trees in their natural environment, while Pu'er is recognised around the world for the finest fermented tea. TCEB is very pleased to have a chance to organise this seminar because apparently, this meeting created the business opportunity for the local people,” said Mr. Puripan

Chiang Rai Governor, Narongsak Osotthanakon, said that Chiang Rai’s Special Economic Zones are located in three different districts – Mae Sai, Chiang Saen and Chiang Khong. Mae Sai district is designated to be a trading city because it has a huge potential of trade and investment. Mae Sai’s trading revenue has increased steadily. Nestled along the bank of  Mekong River, Chiang Saen is established as a Port City and Tourism Centre. This riverside district also operates a commercial port for cross-border trade with Lao People's Democratic Republic, the Republic of the Union of Myanmar and People's Republic of China (Yunnan). Chiang Khong District, on the northeastern part of Chiang Rai, is a Logistic City because it’s located on the important trading route with roads connecting to R3B highway and the Fourth Thai-Lao Friendship Bridge making transportation to China a breeze.

In addition, Thailand Convention and Exhibition Bureau or also known as TCEB has role in promoting and developing business event in Thailand. TCEB aims to work toward establishing Thailand as Asia’s center of organizing an outstanding business event by providing flexible and service-oriented to tourists who take part in the meeting and tourism as a memorable experience from all around the world, seminar participants and exhibitions including encouraging participants to be aware of a variety of Thailand’s remarkable destinations, activities, and other attractions. Partner with us today to connect with alliance network. Meanwhile, TCEB plays important role in providing strategic guideline to MICE industry, which featuring seminars, incentive tourism as a memorable experience, exhibitions, and trade shows by promoting growth and sustainable development through planning in segment and providing advice to all companies on being the leader in the industry. Also, to provide creative suggestion for business event development, supporting event organizer in private business by aiming in solving specific problem and proving guideline in business building along with a long term sustainability of overall segment, individual support as middleman who connect new alliances to MICE event organizer and encourage strategic cooperation within the region and world-class level. A strong, flexible, and widespread alliance network is an important foundation of building competitive advantage in the future.