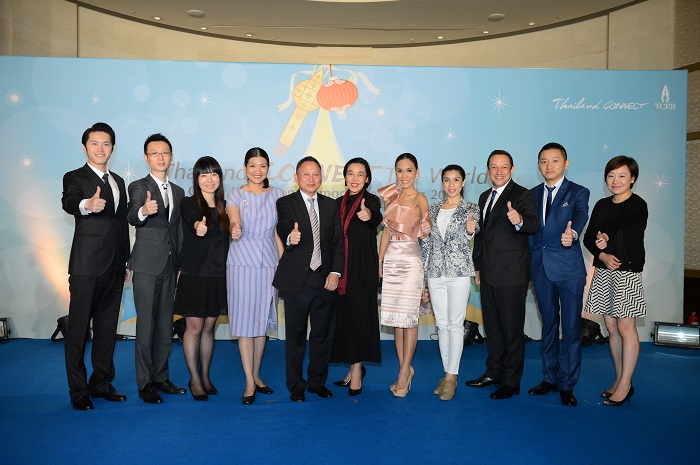 Shanghai / 17 September 2015 – The Thailand Convention and Exhibition Bureau (Public Organization), or TCEB, today hosted the “Thailand CONNECT The World: China MICE Commemorative Dinner 2015” to reassure confidence on Thailand as a gateway to ASEAN success for business events stakeholders from China, which is the kingdom’s No. 1 source market contributing more than 120,000 Chinese business travellers to enjoy the endless choice of Thai MICE facilities in 2014. The bureau also uses this special occasion to mark the 40 years of Thai-Chinese relations and mutual prosperity in which trade between the two nations now exceeds US$63 billion annually. 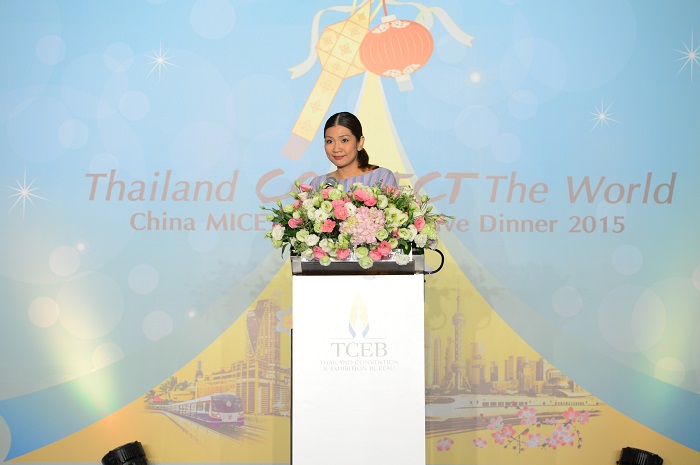 Ms. Parichat Svetasreni, Director of Marketing and Corporate Image Department of TCEB, said that “Recognising the mutually beneficial significance of the 40th Anniversary of Thai-Chinese Relations, TCEB as the Royal Thai Government’s flagship body established to support the Thai MICE Industry, would like to use the occasion to present a specially-packaged promotion from TCEB in collaboration with our partner, the Ratchaprasong Square Trade Association or RSTA, to Chinese business events stakeholders. This very special event also serves as a vital platform for us to provide update on the MICE situation in Thailand, while further strengthen the awareness of Thailand’s business events industry among the media in China.

Thanks to its central position in Asia, situated as the ideal gateway to ASEAN, Thailand's MICE industry has achieved enormous growth and importance. In the fiscal year 2014 – from October 2013 to September 2014, a total of 919,164 business events visitors were attracted by Thailand’s endless choice of business destinations, global standards of service, and diverse business opportunities, generating revenue of 80,800 million baht (US$2.69 billion / 14,690.89 million RMB). The trend in growth continued into the current fiscal year and, looking at the first three quarters from last October until June of this year, a total of 726,280 high quality business events have already made Thailand their choice of destination for MICE related events, generating more than 63,714 million baht (US$1.80 billion / 11,584 million RMB) for the Thai economy.

Ms. Parichat added that, “TCEB, in association with our partner, the Ratchaprasong Square Trade Association (RSTA), will be offering China’s MICE visitors a specially-packaged promotion, The Thailand CONNECT Welcome Package Ratchaprasong District, providing recipients with special hotel and retail discounts, as well as other benefits, right in the heart of vibrant Bangkok downtown.”

TCEB and RSTA partner under the Thailand’s MICE United II, a strategic campaign with collaboration from 9 public and private organisations to reinvigorate Thailand’s positive image and position the country as a gateway to success in ASEAN, especially as the region is moving toward the implementation of the ASEAN Economic Community (AEC). 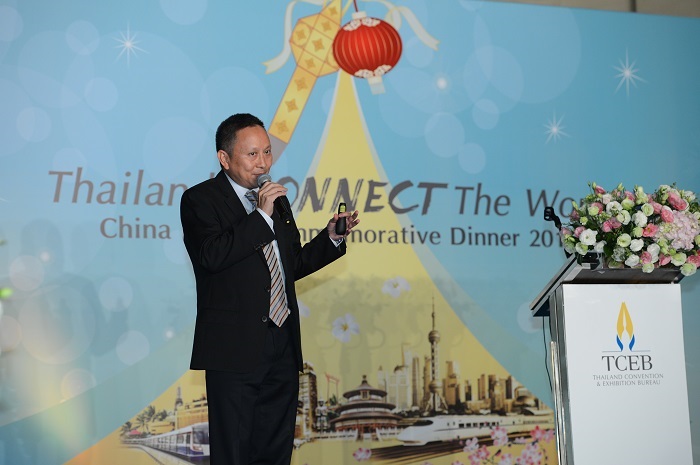 Mr Chai Srivikorn, President, Ratchaprasong Square Trade Association (RSTA) said that “Formed in 2003, RSTA seeks to turn Ratchaprasong into one of the top downtown districts in Asia, rivalling Singapore's Orchard Road, Japan's Ginza and Hong Kong's Central district. Located in the heart of Bangkok at the intersection of three major roads, the one-square-kilometer area offers over 3,900 hotel rooms, over 40,000 square meters of convention center and more than 884,200 square meters of retail shops, restaurants, spas and entertainment venues. Cultural sites also offer character to the district’s thriving ambience. In addition, a skywalk system connecting the city's rapid transportation network with the area's many shopping complexes is to be extended in the interest of making the area walkable and therefore more accessible. Ratchaprasong welcomes 400,000 visitors per day or more than 146 million visitors a year.”

“To perfect the impression of Ratchaprasong as the area that can fulfill all commercial and lifestyle needs of shoppers and businesspersons from around the world, “Ratchaprasong Bangkok Downtown” is a constructive revitalization plan created to fill gaps and drive the district with excellence in three main areas: Must Visit the Best of Bangkok, City MICE Hub, and Happy Community.”

“Ensuring business travellers enjoy MICE privileges in the Heart of Bangkok, TCEB and the Ratchaprasong Square Trade Association (RSTA) have jointly created the Thailand CONNECT Welcome Package of special privileges for a superb Thai experience. As the cosmopolitan center of Bangkok, Ratchaprasong district encompasses extensive meeting facilities, luxurious hotels, extensive shopping and dining outlets, alluring entertainment and spa attractions. All are linked together by a skywalk network, providing easy and safe access to all buildings.”

Thailand has already welcomed a solid range of MICE events from China in 2015. Infinitus China broke new ground by sending over 12,000 of its employees on a six- day holiday in Bangkok and Pattaya in May, and intends to send up to 20,000 employees next year. Perfect (China) Marie Anne Tour to Thailand hosted nearly 5,500 guests from China at the Pattaya Exhibition and Convention Hall (PEACH) in April. Beijing UFC likewise held a five-day event for 300 persons in Phuket in July. In August, Thailand welcomed 700 delegates sent by Mary Kay Cosmetics and 400 delegates sent by Amway China. In September, Bainianhutu Winery will hold a 200-pax event in Phuket. TCEB looks forward to welcoming more MICE events from China in the coming months as well as in 2016 and beyond.

Together with the Thailand CONNECT The World, and Thailand’s MICE United II campaigns, as well as other market development initiatives, TCEB expects Thailand to welcome 1,036,300 business events travellers (a 17 per cent increase from 2014 targets), earning to the Thai economy a total of 106,780 million baht (US$3,029.20 million / 19,414.52 million RMB), representing a 22 per cent year-on-year in 2015.