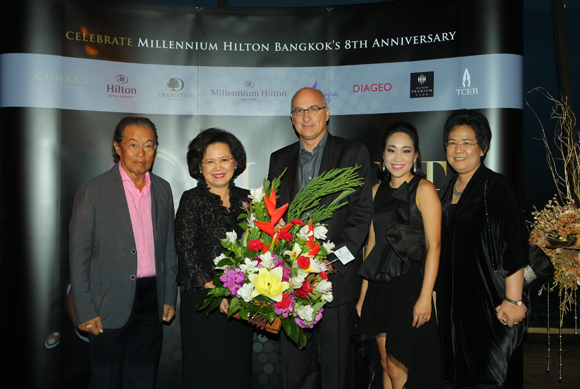 Bangkok, Thailand, July 18th 2014: Black is the colour of celebration as Millennium Hilton Bangkok gets ready to mark its 8th Anniversary at a party in the ThreeSixty Jazz Lounge on the evening of the 19th July, following the ‘City2River’ Hilton Worldwide Thailand Race held the same day.

“It is also an excellent time to look back on our achievements over the year, of course,” says De Cuyper. “The exemplary services from our team members, complemented by our luxury products and facilities, are evidenced by the receipt of not just one prestigious award but three. The first of these is an international award from the renowned World Luxury Hotel Awards for the 'Best Luxury Rooftop View Hotel in Asia, 2013', while our local awards comprise a Thailand Best Restaurants award from Thailand Tatler and an Editor’s choice award for PRIME from Bangkok’s Best Restaurant Awards 2013. We are equally proud of such efforts as our worldwide ‘Light Stay’ initiative, a sustainability project with Mungcharoen Biomass in Surin province, a mangrove planting project in Samut Songkram, community programmes, like Baan Mahamek, and our work with the Orphanage Foundation of Thailand and Baan Kru Noi”.

Anniversary celebrations however began long before the party. In May, for instance, the Millennium Hilton Bangkok held an ‘8th Mania’ Food promotion, complete with special offers from all outlets, and prizes that included a round-trip Bangkok Airways ticket for two to Samui and eight accommodation vouchers for stays in all the other Thailand-based Hilton properties.

The anniversary party will begin with a warm welcome by De Cuyper himself, and the entertainment will get off to a fine start with 2 KPN’s Award singers Kru Nok, Um – Prutthimut and DJ Ou – Tannatonn Palakawong Na Ayudhaya.

Joining the party will be the 80 people who participated in the ‘City2River’ Hilton Worldwide Thailand Race earlier that day, an event that follows a similar clue-and-challenge format to the one featured on the Amazing Race TV series, except that this one leads contestants to Hilton hotel-based pit stops. Also like its bigger TV version, the event tests fitness, wits and competitiveness, as participants race from one pit stop to the next, finally reaching the finishing line at the Millennium Hilton Bangkok, ahead of the anniversary party.