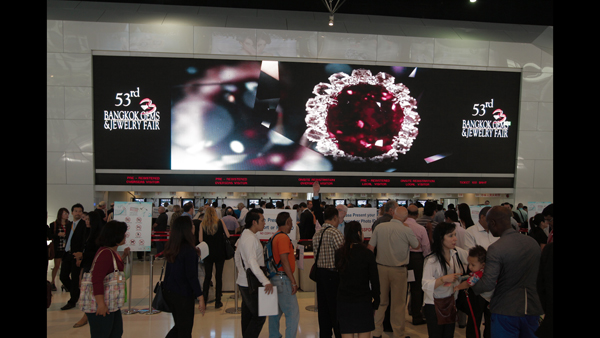 The official opening ceremony is scheduled for 9.00 a.m. on Tuesday 25 February, with the Minister of Commerce presided.

The February Bangkok Gems & Jewelry Fair is considered to be the first large fair of the year on the international gems and jewellery calendar, and it has established itself as a world-class event. 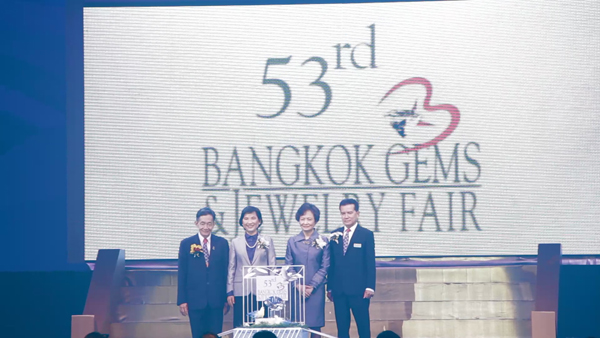 The Thai Government is waiving the regular 20% import duty on gems and jewellery sold at the 53rd Bangkok Gems & Jewelry Fair (BGJF).  Foreign exhibitors are allowed to bring in and sell gems and jewellery from other countries duty-free, while local exhibitors can reduce their selling prices after cutting down on imported parts and products’ costs.  Thus, both local and foreign buyers at the fair can take advantage of 20% savings, giving them additional purchasing power at the Fair. 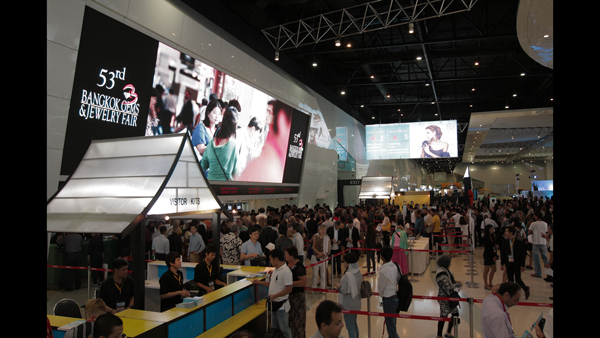 “We are privileged to have the government working alongside us so directly,” says Mr Somchai Phornchindarak, President of the Thai Gem and Jewelry Traders Association and Chairman of the Gems, Jewelry and Precious Metal Confederation of Thailand.  He said the government decision came at the heels of TGJTA’s strong advocacy for a concessional duty rate of 0%, and they are happy to see their request granted.  “The government has been with us every step of the way, helping to promote exports was well as developing overseas markets via trade fairs, road shows and exceptional exhibitions.  All these changes predict a gleaming future for all,” added Mr Somchai. 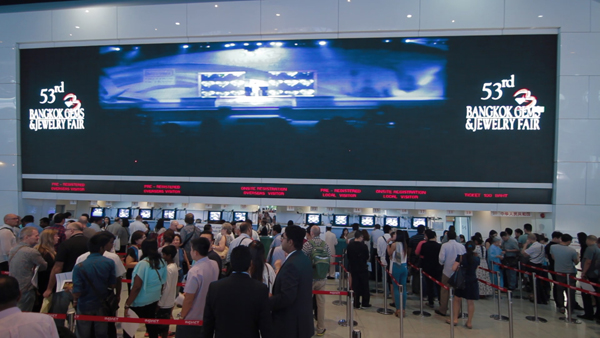 The duty-free privilege is considered under a temporary grace period (15 days before/after the BGJF53) for foreign exhibitors at the BGJF53.  Products to be covered by the measure are pearls, precious stones and metals, imitation jewellery and coins – all categories that fall under the International Trade Commission (ITC)’s Harmonized System Code, Chapter 71.  The import-duty-free incentive can only be availed of at the BGJF53 though, by exhibitors endorsed by TGJTA.  Sellers who are not endorsed would still have to pay the standard 20% import duty.  Moreover, the regular 7% Value Added Tax still applies to all exhibitors, local and foreign. 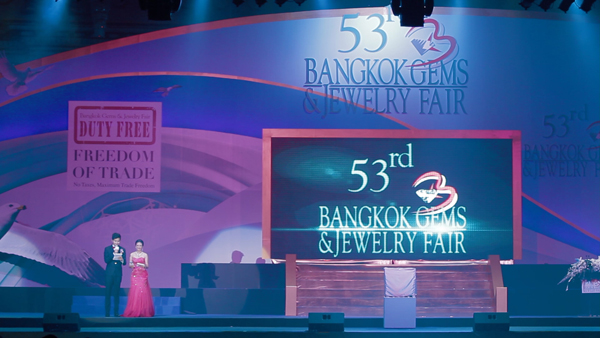 The Bangkok Gems & Jewelry Fair is organized jointly by the Thai Gem and Jewelry Traders Association, and the Department of International Trade Promotion, of the Ministry of Commerce.  The Chief Executive Officer of the BGJF Organizing Committee is Mr Suttipong Damrongsakul.

Mr Suttipong said the duty-free privilege would significantly propel Thailand to become the “golden gateway to the gems and jewellery industry of Association of South East Asian National (ASEAN) – a region with a 600 million population.”

The BGJF53 is expected to draw tens of thousands of buyers from all around the world.  The bi-annual event is regarded as the world’s fifth and Asia’s second largest trade show in the gems and jewellery market.  The fair boasts of gross export revenues exceeding Baht 400,000 million or US$12.8 billion. 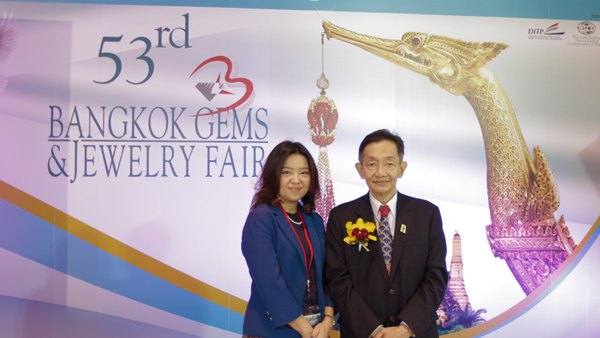 A matter of concern to visitors and exhibitors to BGJF53, are the political street protests and marches that have been taking place in Bangkok in January and February of 2014.  Fairgoers are advised that the street protest situation in Bangkok has calmed down significantly since the Thai general election on February 2nd, which was held successfully with minimal incidents.  Street protests, peaceful and orderly, now occur only sporadically at just a few venues.  Protests of this nature will not affect the Bangkok Gems & Jewelry Fair, nor the visitors coming to Fair.  It should be emphasized that despite international media stories to the contrary, Bangkok is not engulfed in city-wide chaos, nor has it been.  For visitors, Bangkok continues to rank among the safest cities in the world.

The Fair organizers are full aware of the concerns of the fairgoers.  The security and safety of the Fair, of the visitors, and of the exhibitors is of paramount importance.  The organizers are continuously monitoring the situation in Bangkok, and will keep the Fair’s visitors and exhibitors full informed of all that concerns their security and safety.

Thailand’s Department of International Trade Promotion, through its 62 trade offices worldwide, has been promoting the 53rd BGJF among international buyers and visitors.  The objective has been to raise the confidence of international traders as to Bangkok being a viable venue; to relieve concerns regarding the Bangkok protest situation; and to inform visitors of the incentives available to buyers and exhibitors at the Fair.  Incentives include:

Another tax-free initiative the BGJF is offering is the Zero VAT Pavilion, where buyers are exempted from paying the 7% value-added tax imposed on rough gems and raw materials imported into Thailand for manufacturing. It’s a government-backed policy that aims to strengthen Thailand’s position as the “World’s Gems and Jewellery Hub” and the largest manufacturing centre for such products in the world.  Mr Suttipong says the Zero VAT Pavilion will surely attract buyers looking for excellent bargains.

As with previous Bangkok Fairs, the BGJF53 will be operating the Business Matching Service – the scheme that helps foreign buyers identify, locate and communicate with exhibitors long before the fair actually begins.  After registration, customers are assisted by staff members of the Fair to view suppliers’ profiles, see their latest products, and select those whom they wish to meet.  The service is free of charge, conducted online, and done in the comfort and privacy of buyers’ offices or homes.  In return, sellers are able to study the buyers’ specifications and prepare customized sales pitches well ahead of time.

“The service is immensely popular as it gives buyers the ability to both swiftly and accurately locate very specific suppliers in an amazingly fast and convenient way,” says Mr Suttipong, Additional privileges that the Matching Service offers to is the chance for buyers to meet and sit with sellers, by appointment, in a private, comfortable room with special VIP service.

According to organizers, hundreds of buyers at the previous fair availed themselves of the service and were highly satisfied with it.  Around US$2 billion worth of gems and jewellery were purchased using that method alone.

Over 1,500 gem and jewellery suppliers are participating in the 53rd BGJF.  Organizers have put up over 3,000 booths this year, expecting a significant rise not only in the number of exhibitors, but also in the number of booths the sellers will be renting.  Now running in its 30th year, BGJF53 is Asia’s largest column-free, ground-level exhibition facility.

Highlights of the 53rd Bangkok Gems & Jewelry Fair include:

In confirmation of the clear image of Thailand as the World’s Gems and Jewellery Hub, there are over 30 nations participating in the February Fair (not counting ASEAN countries), with more than 300 booths, and including participants from USA, Europe and Asia.  For this fair, the organizers have set a target of attracting 30,000 buyers coming from 125 countries.  It is expected this will be a most energetic fair, stimulating a large volume of orders.