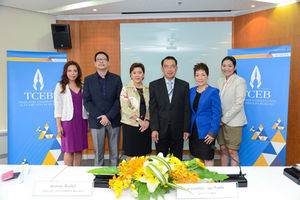 Bangkok / 21 August 2013 – Thailand Convention & Exhibition Bureau (Public Organisation) or TCEB disclosed that the performance of Thailand’s MICE industry in the Quarter 1-3 (October 2012-June 2013) of the fiscal year 2013 has grown 12.04 per cent. Asian market continues to make the largest number of MICE travellers, while European MICE travellers have begun to show the sign of economic recovery and tend to have successive expansion. TCEB is moving fast to organise strategic marketing activities to retain foreign MICE markets, as well as expand the operation to promote domestic MICE besides the improvement of Thai MICE capabilities preparation for the ASEAN Economic Community (AEC). TCEB is confident that Thai MICE will be drawing around 940,000 MICE travellers in 2013 for which 88,000 million baht can be generated into Thailand.

Mr Nopparat Maythaveekulchai, president of Thailand Convention & Exhibition Bureau (Public Organization) or TCEB, revealed that, “Overall picture of TCEB’s performance in the Quarter 1-3 of fiscal year 2013 has shown the total number of foreign MICE travellers of 747,072 or equal to 64,331 million baht in revenue. It is expected that the end of Quarter 4 (July-September 2013) shall bring about the growth for Thai MICE as TCEB has foreseen earlier. The progress will greatly be contributed by the execution of strategic marketing movements which have continued from time to time, as well as the strengthening of Thai MICE to tackle with the launch of AEC,”

During the Quarter 1-3, to promote Thailand’s MICE industry,TCEB has seen the achievement in retrieving and supporting the following successful business events:

Overall picture of international markets in the Quarter 4 will see TCEB paying higher attention to ASEAN through the alliance with high-potential countries, while marketing plan for conventions segment will include the conservation of existing markets, creation of awareness and expansion to significant markets, such as Singapore, Malaysia, Japan and Australia. Further, coordination with liaison from public sector will also be initiated, such as Tourism Authority of Thailand, in launching new markets at Coimbatore and Mangalore in India; Danang in Vietnam and Auckland in New Zealand. Besides, international exhibition will continue to execute marketing activities in ASEAN countries, such as Singapore, Malaysia, Japan, India, Vietnam and China. Awareness will be created more in high-potential markets, including France, Indonesia, United Kingdom and Myanmar.

Highlighted activities in the Quarter 4 of TCEB will generally include the implementation of strategies as follows:

2. Promote: Attending 1 trade show, the CIBTM at Beijing in China; Holding of road shows that lead Thai exhibitors to undergo business matching with trading association, public sector and foreign organisers, such as at Moscow and St. Petersburg in Russia, Chennai and Mumbai in India. Side by side, Sales Mission will also be held in Singapore, Hong Kong, Taiwan and The Philippines, while Familiarization Trip will be held for clients from The Philippines, Singapore and Australia. Moreover, marketing promotion campaign ‘100-A-Head’ and ‘Be My Guest’ are set for international exhibition segment.

3. Develop: Development scheme for marketing promotion will include several notable events. For example, the ICCA Thailand Bid Work Shop, Meetings Industry Day 2013: The Winning Formula at Pattaya City. Improvement of MICE industry standards will undergo evaluation and authorisation as the ‘exhibition supported by TCEB’. Also, ASEAN WE STAND project was designed to create connection with public and private sectors. All endeavours is heading towards making Thailand the centre of ASEAN exhibition.

Boosting domestic MICE. Disseminate revenue to regions. Empowering MICE industry beyond limitation. Domestic MICE industry in the Quarter 1-3 had seen TCEB provided support to the holding of 9 domestic MICE events which mainly involve meetings. For example, the 80th Anniversary of the Thai Chamber of Commerce, HR Day 2012 and Global Business Dialogue 2012; TCEB created 3 new events which were significant convention, such as K-SME CARE BIZ FAIR 2012, Essential BrandAge: Life at Future and the MOU signing ceremony between TCEB/Thai Pet Promotion Federation/Food and Beverage Management Association of Eastern Region of Thailand and The Publishers and Booksellers Association of Thailand to jointly promote the D Exhibition. In addition, TCEB supported the holding of 2 domestic exhibitions, which are Furnitech Dinner Talk 2013 (under upgrading mission) and Food Restaurant & Equipment Show (FR & ES) (under inventing mission).

Meanwhile, TCEB will be moving on in the last quarter with various activities aiming to create awareness and motivate domestic MICE, such as ‘D-MICE: Meeting in Thailand’ in Bangkok, Chiang Mai and Khon Kaen / Supporting joint convention with domestic airlines / Supporting the holding of Thailand Competitiveness Enhancement Program 2013/ The First I-san Book Fair at Khon Kaen (under disseminating mission), 5th UBON Book Fair 2013 (under upgrading mission) and Green Festival (under creating mission). Improvement of Thai MICE’s potential has been the key to business sustainability in the past 3 quarters. TCEB achieved in operating important activities. For example, international MICE standards curriculum for college, the MOU signing with IAPCO, the MOU signing with MPI, skill standardisation for MICE industry, standardisation of Thai convention room, supporting sustainable environmental conservation and preparation of MICE entrepreneurs for AEC.

Potential improvement plan for MICE industry in the Quarter 4 involves the enhancement of potential of upstream, intermediate and downstream through the execution of significant activities, such as International MICE standards curriculum towards MICE major (MICE case study)/ Expansion of International MICE standards curriculum to vocational schools nationwide/ Case study of alliance expansion between international colleges and Expansion of workshop on conventions and the exhibition of MICE City.

“TCEB has foreseen that Thai MICE will value at more than 88,000 million baht in 2013 from a total number of 940,000 MICE travellers, which would surge by 5-10 per cent. Statistics in the 3 past quarters indicated that MICE travellers have grown to as high as 747,072. We are certain that by implementing our strategic business promotion plan for the Quarter 4, TCEB will definitely land on targeted point of success.” said Mr Nopparat.