Wake Thailand Up to be World-Famous through “Festival Economy” 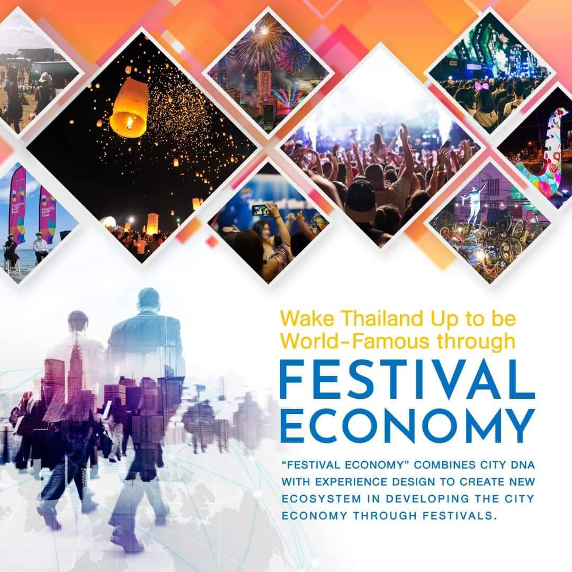 However, the current world’s trend has changed and people are getting more interested in lifestyles. Thus, new types of festival have been created and hosted all over the world, such as the pristine and world-famous, “Art Biennale” which is organized in many regions around the world. Even Thailand held grand Arts Festival like “Thailand Biennale Krabi 2018” and also hold the latest “Thailand Biennale Korat 2021” as well.

TCEB realizes the importance of developing and preserving each city and local community’s culture, traditions, and way of life throughout Thailand which creates the economic heritage through festivals in cities and communities. Therefore, this idea leads to “Festival Economy” which combines City DNA with experience design to create new ecosystem in developing the economy of each city through festivals.

Festival Economy will be a tool to attract travellers with high purchasing power, who are passionate about foreign culture and seeking a new kind of experience, to visit and enhance the economy of cities and local communities through the festivals. For example, “HUA HIN HOP FEST 2021”, a hybrid festival with the concept of “Nostalgia: Old City, New Story”, gathers and presents the Hua Hin City DNA comprising its valuable architecture, art, and music. This festival is an initial model supporting Festival Economy in each city which will be held in the future.

In addition, Festival Economy is an important tool to boost up economy, distribute income and prosperity together with develop the quality of city, infrastructure, and personnel in the area. Hence, it leads to the development in all aspects consisting of society, economy, and environment. Festival Economy needs the cooperation between local communities and cities to bring culture and seek City DNA to deliver to the world. Local people as an owner of the area should also cooperate to make Festival Economy more developed and successful until it is widely and sustainably well-known all over the world.