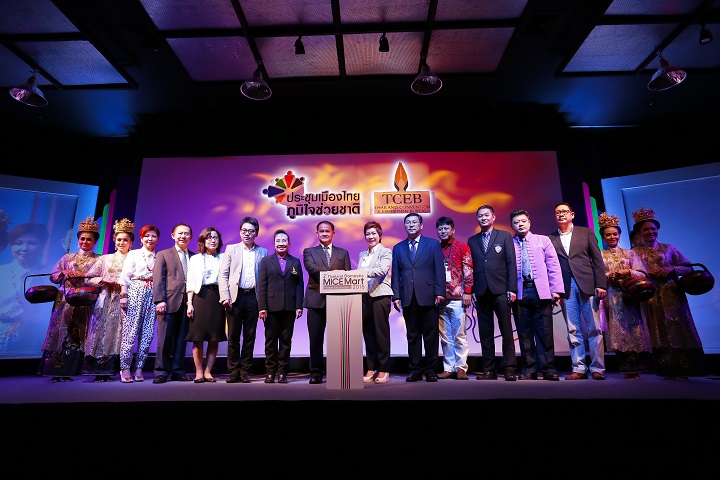 Phuket : 23 July 2015 - Thailand Convention & Exhibition Bureau (Public Organization) or TCEB, joins pact with Phuket Province in seeking the enhancement of provincial MICE businesses. Featuring the “Andaman’s Incentive MICE City” to encourage the D-MICE scheme through the holding of “2nd Thailand Domestic MICE Mart”, the event is expected to boost the number of MICE travellers of Phuket via business matching. 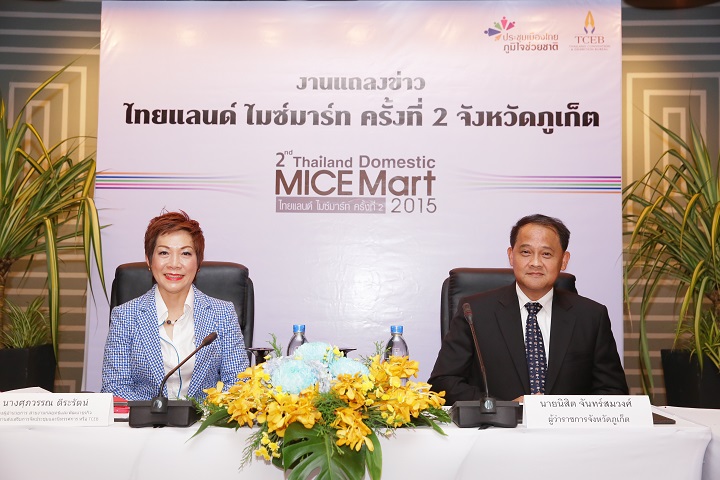 Mrs. Supawan Teerarat, Vice President Strategic and Business Development, Thailand Convention & Exhibition Bureau (Public Organization) or TCEB, disclosed that, “Phuket is a MICE City that is highly popular among MICE travellers. Within the half of fiscal year 2015 (October 2014-March 2015), the number of domestic MICE travellers entering into Phuket reached 73,570 which generated 573.42 million baht revenue. Out of the aforementioned statistics, the incentives segment accounted for as high as 46.37 percent of Phuket’s MICE market or equal to 34,112 MICE travellers which generated approximately 469.85 million baht of revenue, following by the international convention, exhibitions and corporate meeting segments.”

In pursuit of growth for the “Incentive MICE” segment and encouragement of MICE business for both meetings and exhibition, TCEB has joined hands with the province, ranging from public sector to tourism and service sectors in formulating the strategies for the mobilisation of Phuket’s MICE to ensure it is improving in line with the tourism scheme of Phuket and the government. Differentiation will be applied to add value to local economy, especially by featuring “MICE” as key selling point. In boosting the number of MICE travellers of Phuket, TCEB is dependent on 3 key marketing strategies as follows: Strategy 1 – The launch of “D-MICE: Meeting in Thailand” campaign altogether with the expansion of capabilities of MICE Cities in the Andaman (Phuket, Krabi, Phang Nga, Ranong and Trang) to serve meetings and conference activities; Strategy 2 – The promotion of meetings and incentives events within the Royal Projects to relate with the strategy of Thai government aiming at promoting tourism and conference at the Royal Projects, such as the revival and conservation of Thung Talay area in Krabi Province under His Majesty The King’s initiative and; Strategy 3 – The encouragement of domestic exhibition businesses through the “distribution of exhibition” which will bring successful events to Phuket, e.g. Food and Hotelex 2015 that will be running from 19-22 November 2015.

“Distinction of Phuket embraces a wide variety of geography and activities that suit MICE travellers, especially the incentives. TCEB will feature the capabilities of Phuket into 6 relevant concepts as follows: Team Building Concept concentrates in creating rapport among company’s employees through group activities; Corporate Social Responsibility Concept involves the mangrove forest planting, releasing sea turtles and construction of artificial coral habitat; New Experience Learning Concept focuses on hands-on practices and visiting interesting venues, such as educational tour to the Royal Projects, industrial plant or local production line; Green Meetings Concept involves the holding of conference at natural venues along with conducting activities that relate to the conservation of nature and environment; History & Culture Concept features visits to historical or cultural venue at historical sites and Luxury Concept that concentrates in creating custom events to meet the requirements of the group.

In the realm of development, TCEB has initiated the ‘Thailand MICE Venue Standard’ project with the objective to heighten facilities in Phuket to achieve the assessment of venue standard certification for which will guarantee that the premises meet international standards. In addition, the bureau is currently paving the way toward establishing the MICE promotion and information centre in Phuket, as well as initiating the training courses necessary for personnel from educational institutions and relevant agencies in order to escalate the capabilities of domestic manpower to be able to serve sustainable growth of Phuket’s MICE industry through the Coach the Coaches 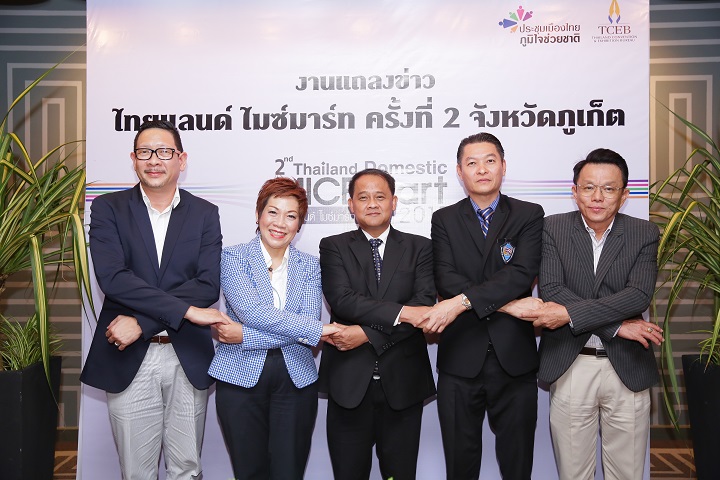 Mr. Nisit Chansomwong, Phuket governor, said that, “In this year, the province has drafted up the provincial scheme for MICE to cover 2 main aspects including 1) Partnership or the collaboration with associates, particularly key parties such as Phuket Municipality, Phuket Tourist Association, Thai Hotel Association (Southern Chapter) and participation of local community, as well as the cooperation with the Andaman provinces (Phuket, Krabi, Phang Nga, Ranong and Trang) for joint development to prepare Andaman’s areas for future connection and MICE events; 2) Destination Marketing or the discussion on MICE market positioning together with public and private sector, basing on existing schemes designed by the province, municipality and relevant sectors for Phuket to grow as one of the world’s leading MICE destinations.”

Additionally, the provincial development plan has been formulated to serve MICE industry in 3 aspects, which are 1) Development of new venues and services to serve quality market, such as the development of old town area as the origin of either ‘peranakan’ culture or the Baba-Yaya, the Chinese Malay’s traditional residential area to serve as the point for educational tour and venue for the holding of special events that create a sense of conservation and the love of homeland; 2) Promotion of LUXURY market in line the Government policy in making Phuket soar as the world’s top recreational beach town like Monaco; and 3) Collaboration with TCEB in terms of pooling events that are relevant to market positioning of Phuket in order to enhance the province’s public image, such as the holding of conference and food exhibition, the peranakan cultural event, cruising activity, etc.

Moreover, the province has the policy to support MICE industry through investment plans centering around building necessary infrastructure, such as the extension of airport, improvement of roads and beach landscape, investment in the City Port’s expansion, the investment projects in hotels and convention centre of The Mall and Central groups, along with the concentration in high quality MICE market by researching the competitive advantages of Phuket.

“Improvement of quality of Phuket’s MICE businesses with the partnership of public and private sector is considered an essential force that moves Phuket forward with a clear purpose, reflecting our position as the Andaman’s hub of MICE. In 2015, D-MICE has targeted growth in terms of number of MICE travellers and revenue by 5 percent. We have eyed 15.23 million MICE travellers which will generate approximately 33,069 million baht of revenue.” concluded Mrs. Supawan. 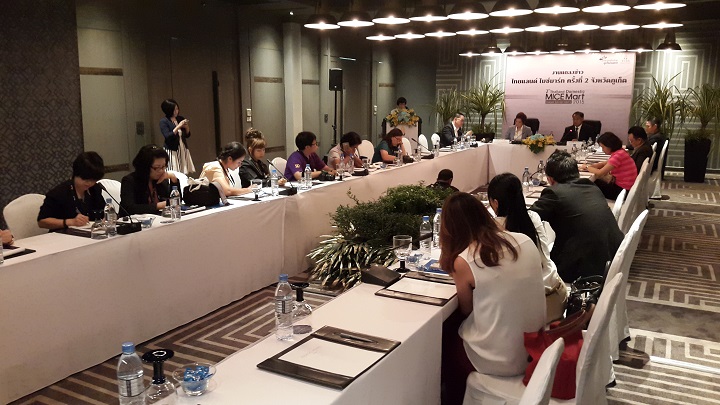 Phuket is preparing the province towards several events related to MICE by which TCEB has provided strong support all along as follows: the Vestige Marketing PVT Ltd Thailand Conference 2015, British American Tobacco Marketing Conference 2015, International Conference on Beneficial Microbes 2015, The Phuket International Boat Show 2016 (PIMEX), Laguna Phuket International Marathon 2015 and Food and Hotelex 2015. Side by side, there is also a wide array of domestic events scheduled for July-December 2015, including The AEC PLUS Seminar of Phuket entrepreneurs, the 25th crew safety training and the prevention of MERS workshop, etc.

Information of the “2nd Thailand Domestic MICE Mart” in Phuket

The “2nd Thailand Domestic MICE Mart” in Phuket is a sales promotional event designed to encourage MICE business activities, especially in incentives segment. As one of the operations under the D-MICE: Meeting in Thailand scheme, the event will initiate business matching between 30 target buyers who are organisations from Bangkok, plus 60 local buyers, and the 34 sellers who are representing hotels, convention venue, attraction sites, MICE event organisers and MICE service providers, such as Mission Hills Phuket Golf Resort, Indigo Pearl Hotel, Duangjitt Resort & Spa, Phuket Fantasy, Arrow Media Co., Ltd. and Coco Travels, etc. It is expected that business transactions emerging at the event will generate approximately 18 million baht of revenue.