The ongoing anti-government demonstrations in Bangkok have been normal to peaceful most of the time. The main demonstrator group, the People’s Democratic Reform Committee (PDRC), has relocated their rally stages from the Democracy Monument on Ratchadamnoen Klang Avenue to seven new rally sites by this morning as announced. Meanwhile, two other anti-government demonstration groups remain staged at Ratchadamnoen Klang Avenue and near the Government House.

The anti-government group’s intention is to pressure the Caretaker Yingluck Shinawatra Government to step down.

Department stores and shopping malls located in Rajaprasong and Pathumwan areas have announced the change of opening times to 10.00-20.00 hrs. today from the normal closing time of 21.00 or 22.00 hrs.

Life in Bangkok and throughout Thailand continues as per normal. All roads in Bangkok, excluding those at the rally sites or directly link to, are open to traffic at all times.

Thai Airways International has confirmed that it is operating as normal with no flight cancellations, no unplanned flight delays and no reduction of staff in operational areas. Passengers can check flight status at www.thaiairways.com.

The Suvarnabhumi Airport Rail Link has announced it will increase the frequency of its train services between the airport and the Makkasan City Air Terminal / Phyathai Station to 78 SA Express and 161 SA City Line trains per day. Journey on the SA Express takes 15 minutes and the SA City Line takes 30 minutes. Trains will run every 12 minutes during rush hours (06.00-09.00 hrs. and 17.00-20.00 hrs.) and every 15 minutes during normal hours.

The State Railway of Thailand (SRT) has announced it will increase the frequency of its train services en route between Don Mueang International Airport and Hua Lamphong Station to enable commuters and air passengers to connecting to the skytrain, the subway or the airport rail link stations.

The Bangkok Mass Transit System Public Company Limited, which operates the BTS skytrain system, has announced will increase the frequency of its train services to every two and a half minutes (from normally every three minutes during rush hours). The service is open until 24.00 hrs. as usual.

The Bangkok Metro Public Company Limited, which operates the MRT subway system, has announced that it will increase the number of staff in operational areas and ticketing points to facilitate the anticipated increase in the number of passengers. The service is open until 24.00 hrs. as usual.

The Bangkok Mass Transit Authority (BMTA) has rerouted many bus and van services to avoid the protest areas, and is using expressways to deliver passengers to major stops that connect to the skytrain or the subway.

About 6,000 taxis registered with Airports of Thailand have been given special stickers to show that the vehicles are carrying tourists. Meanwhile, passenger buses bearing special signs issued by the Ministry of Transport can use the expressways free of charge.

The Bangkok Metropolitan Administration (BMA) has announced that it will prepare 46 boats to help commuters on both sides of the Chao Phraya River. The BMA has also advised commuters to avoid the demonstration areas by following its shortcut route signs or take the skytrain or the subway.

Meanwhile, boat operators have been asked to increase the frequency of services on Saen Saeb Canal and the Chao Phraya River.

Elsewhere in the country, all means of transportation are also operating as per normal, including train services by the SRT and bus and van services by the Transport Co., Ltd. However, the SRT has announced a closure of rail tracks on the Bangkok-Chumphon route between 11 and 14 January 2014. 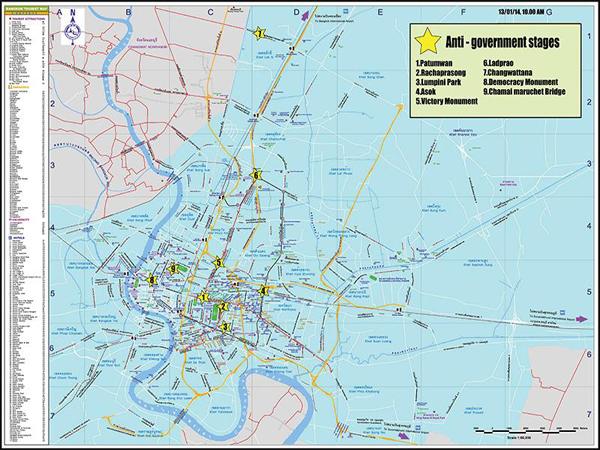